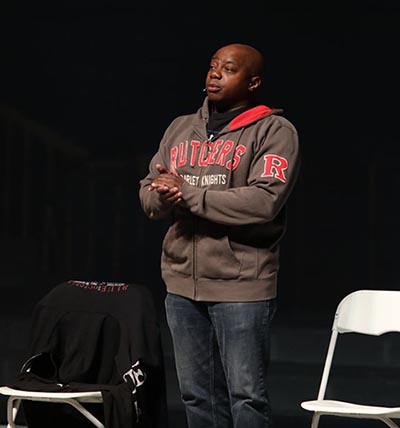 On March 3, 2022, psychologist, poet, and performer, Dr. Mykee Fowlin, took Bergen County Academies (BCA) students on an experiential journey as he led them to reexamine core precepts they learned throughout childhood and are still learning today.

When they first entered the auditorium wearing Green Ribbon Day bracelets, most students expected another mental health assembly with more tips on how to be less stressed and more adaptive. But it became clear within the first few minutes that his performance would be anything but cliché or expected.

“He was a lot more animated than I thought he would be,” said AVPA-M freshman Hannah Shin. “I didn’t expect him to do impersonations or be so funny and relatable. I thought he was just another person coming to talk to us about what we already know.”

According to his website, Dr. Michael Fowlin, better known as Mykee, has been formally acting since the age of 11, but he first started creating voices when he was just 9 years old. He has an undergraduate degree in psychology from Evangel University, in Springfield, Missouri, and he received a doctorate degree in clinical psychology from Rutgers University in 2001.

He has worked with all age groups, and although each of his presentations are different, he highlights inclusivity, kindness, and self-acceptance as some of the overarching themes.

At BCA, his story started with the “Japanese teacup philosophy.” One day while he was at a sushi restaurant, he skeptically asked the waiter, “What’s wrong with your teacups?” Rather than making a big deal out of it or getting offended, the waiter smiled and practiced the vital concept of saving face as he enlightened Dr. Fowlin. “If it’s too hot to touch, it’s too hot to drink,” he said.

Through this humorous and relatable story, Dr. Fowlin illustrated his desire to hear people’s internal stories instead of judging them based on external appearances. He encouraged everyone to get to know people’s temperatures–instead of just touching their handles–by asking personal questions and putting in the time and effort to listen.

Three different characters are a constant in all of Dr. Fowlin’s assemblies, all of whom contribute unique perspectives on what he calls “shared experiences.” These are relatively minor experiences that many people have as they grow up. Even though they are often forgotten, they remain in the subconscious as moments that fundamentally change people’s personalities and still have the power to elicit strong emotional reactions.

First, the extremely talkative, 6-year-old Germaine, who has big dreams and believes in the power of words.

Second, a talented Rutgers football player, Octavius, who questions whether he wants his legacy to be as just a quarterback or as an upstander who made a difference. Through role models such as his father, his high school football coach, and his brother who has autism, Octavius learns the difference between doing “what he is supposed to do and what he needs to do.”

Third, Benjamin, who answers a thought-provoking question with an answer that leaves the audience stricken with its accuracy and detail. The question he answered was “Since we’re all different, why do we hate different people?” His answer: “In first grade, everyone received a paper with rows of objects with the instructions ‘Cross out the one that doesn’t fit.’”

The characters’ stories were sprinkled with small anecdotes of Dr. Fowlin’s own life, discussing his relationship with his immigrant parents and his struggles as an African American. For AMST freshman Samantha Arteaga, the most relatable story Dr. Fowlin told was about his parents’ reaction when he explained that he wanted to study psychology.

“When we share things with our parents, and they don’t understand why we want to do them or why they’re important to us, we feel disappointed that we don’t have their support,” said Sam. “Confrontations with parents are so scary because we usually end up feeling guilty for going against the people who take care of us. I really connected with Dr. Fowlin about that because he presented that conflict in a way that validated how a lot of students feel, especially in BCA’s environment.”

Everyone comes into BCA knowing that the environment is going to be stressful and competitive, but few students seem to be aware of just how much when they apply. Not counting pressure from parents and peers, students also put a lot of pressure on themselves to perform well on assessments and achieve high-ranking scores in extracurricular competitions.

Dr. Fowlin, himself, noted that BCA is one of his favorite schools to come to because BCA students can connect to his presentation in a way students at other schools never can.

In fact, some students had seen Dr. Fowlin’s presentations in middle school and report being impacted now on a whole new level at BCA. AAST freshman, Kai Kim, watched Dr. Fowlin’s You Don’t Know Me Until You Know Me presentation once before in 8th grade at Cavallini Middle School.

“Seeing it again really changed what I got out of it. I didn’t remember all of the characters, and even though I know I saw them all before, it felt like there were so many new things to understand.” Kai also added, “It was also different watching it in an auditorium full of people, when you can see the change in how the audience feels from one second to the next, compared to how I’d watched it before over Zoom.”

Watching the show in-person, surrounded by classmates, added to the safe atmosphere in which students felt comfortable laughing and crying. Looking around at any point during the assembly, it was easy to see both smiles and tears streaming down people’s faces. By addressing topics that are usually avoided, Dr. Fowlin struck a chord in the audience that left them thinking about his words long after he left.

In fact, after the assembly ended, dozens of students lined up in the auditorium to personally speak to Dr. Fowlin. “I just want to thank him,” Sam said with tears filling her eyes. “I always try to make people smile and make people happy. He showed me how important that is and how I have to keep doing it.”

One student who was deeply affected summarized how many students felt: “Personally, it hit home for me and many others. The point isn’t to affect everyone. He does everything in his power to affect one person. That’s all he strives for and he succeeded. If he affects multiple people then great, but his success is changing someone.”