The Electoral College: An Outdated Practice? 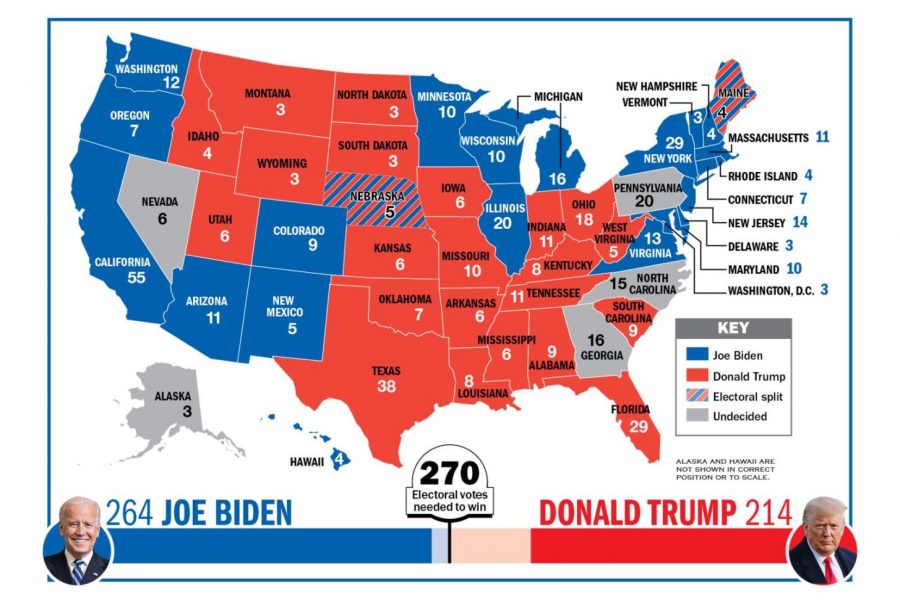 Over the past 20 years, debate surrounding the Electoral College and its purpose resurfaced during each presidential election. In 2000, Republican candidate, George H. W. Bush, and Democratic candidate, Al Gore, went head-to-head to become the future chief of state for the United States. As the election came to a close, the already tight race had an interesting turn of events. Bush had won the Electoral College with 271 while losing the popular vote by 500,000 votes. A similar situation unfolded during the 2016 Presidential Election. Hillary Clinton had received approximately 2.9 million more votes than Donald Trump yet was crushed in the Electoral College losing 227 to 304. Many people began to question the legitimacy of the Electoral College to represent the people’s wishes because on multiple occasions the president of the United State was someone that a majority of Americans voted against. So, why do we keep this system in place? What is its purpose, and what does it actually do?

The Electoral College is unique to the United States and a few other countries, such as Burma, India, Burundi. Most democratic countries determine their leader through a popular vote. What led the United States to use this method to elect a president? During the initial construction of the United States, the Constitutional Convention of 1787 argued and devised multiple systems to elect a president. However, the correct system was not clear-cut, as the people’s involvement in selecting a leader was very uncommon and considered radical for the time. Additionally, the complicated history between corruption and the colonists affected the delegates’ decision. The American Revolution had recently come to an end in 1783. The colonist’s distrust of a powerful monarch exercising immense control was still a fresh wound in the hearts of the people during the birth of the United State. Some members of the convention believed that giving Congress the ability to choose a president may lead to future corruption between the Legislative and Executive Branches. In addition, the delegates had to devise a system that gave the people control without giving them too much power to elect popular, power-hungry politicians. They had to create a system to find a balance of power between Congress and the people. Their compromise was the Electoral College.

One issue with the Electoral College arose with the population distribution and amount of available voters as largely populated cities, such as Boston and New York, outnumbered plantation states, like Virginia. Within the southern states, slaves took up a large portion of the population yet were not allowed to vote. According to The New York Times, “Enslaved people couldn’t vote, but they were still counted toward the slave states’ representation in Congress.”

That meant more power for those states under an Electoral College system.” Because the number of electoral votes was determined by the state’s number of representatives (decided by population size and senators) determining population based on available voters instead of the total population would drastically alter the number of electors slave states would receive. To combat this, non-slave and slave states reached a consensus: slaves counted as ⅗ of a person towards the state’s population but were permitted from voting. Over time, this agreement no longer was used as slavery was abolished and Black Americans were given the right to vote. Nonetheless, as Jesse Wegman of The New York Times states, “This is just one way the legacy of slavery still taints our politics today.” 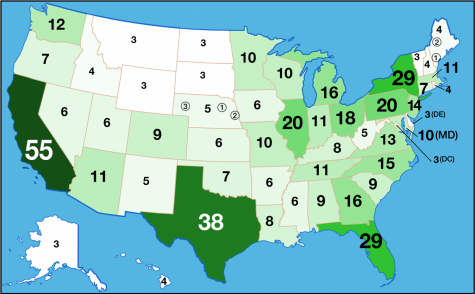 The Electoral College acts as an indirect voting system. The total number of electors is 538 (435 House of Representatives, 100 senators, and 3 electors from the District of Columbia). Each state’s number of electors is determined by its representatives and 2 senators. For example, New Jersey has 12 representatives and 2 senators, giving it a total of 14 electors. However, this causes some disparities in how impactful certain people’s votes are than others. According to Vox, “This combination makes the number of people each delegate [elector] represents way different between states: in Texas, one electoral delegate represents three times the number of people as one in Vermont.” After tension from previous elections, in 1804, the 12th Amendment was ratified and states were no longer given the freedom to distribute electoral votes as they pleased. Article II, Section 1, Clause 3 of the 12th Amendment states that if one candidate wins a majority of the people’s vote within that state, all of that state’s electoral votes will count towards them in a winner-take-all fashion. However, there are some exceptions. Nebraska and Maine use a congressional district method where they give out votes more proportionally according to each congressional districts’ popular vote winner.

The structure of the Electoral College values the votes of some individuals more than others; thus deterring many from voting at all, as they question the legitimacy of this system. Also, the number of votes in one area are weighted differently than an equivalent amount in another area. This can lead to a split such as in the Presidential Election of 2000 and 2016 where one candidate wins the popular vote while the other wins the Electoral College. Voters also debate the effectiveness of a winner-takes-all system because, in this scenario, the votes for the losing parties are irrelevant. In the 2020 Election, if someone voted for Donald Trump, yet lived in New Jersey (a historically “blue” state), their vote would not matter because all of NJ electoral votes go towards the candidate that the majority of the state voted for. The same would occur to someone in  Tennessee (a historically “red” state) who voted for Joe Biden. In an interview with Harvard Magazine, Alexander Keyssar said, “The presence of any kind of intermediaries and any weighting of votes so that not all votes counted equally began to seem more and more objectionable,” referring to the need for electors. Additionally, in the majority of elections, swing states–states that can be reasonably won by the Democratic or Republican candidate–are often focused upon as they are crucial to whether a candidate wins or loses. According to Vox, swing states are “where presidential candidates spend most of their time campaigning. It also means that these states have way more influence over the election than [safe states].” Swing states also affect how the candidates approach their campaign and the issues they choose to focus on because voters within these states have more influence on the election than others. Candidates generally focus on issues specific to these voters such as fracking in Pennsylvania and the motor industry in Michigan. 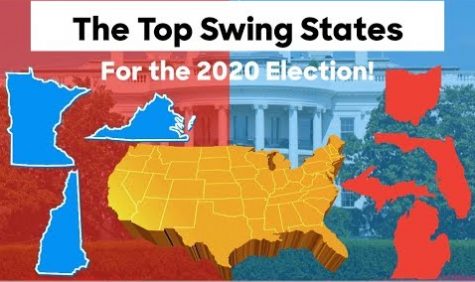 When asked about whether the United States should abandon the Electoral College, reform it, or keep it, Aaryaa Chiney, an AMST sophomore, responded, “I think  [the system] should just be a popular vote or a system that monitors the popular vote, but doesn’t make some people’s votes worth more than others.” She was then asked about the possible benefits of the Electoral College, Aaryaa explains, “it tends to solely help small states and swing states more than others,” which in her opinion, is one of its drawbacks that leads her to believe that “it does not have any benefits”.  However, Aaryaa does think that a possible reform could improve this current election process. Similar to Nebraska and Maine, she reasons that allocating the votes proportional to the candidate’s popularity in the state would be preferable. Aaryaa suggested giving “two votes to the most popular [candidate] and then proportionally allocating the rest.”

Additionally, Angelika Malkowski, an ABF sophomore, concurred, claiming “the popular vote is more straightforward and a more logical way of measuring the country’s votes.” She views the winner-takes-all system as flawed because it does not fully account for the minority.

On the other hand, many have argued the benefits of the Electoral College. One major point in favor of the Electoral College is that it amplifies the voice of less-populated states. A popular vote would ignore the voice of these smaller states, causing the election to be mainly decided by states like California, Texas, and New York. The Electoral College awards smaller states upwards of 3 electoral votes and ensures that, according to Dr. Christina Greer, associate professor of Political Science at Fordham University, “candidates can’t completely ignore small states, because in a close election, every electoral vote counts.”

Another argument made is that the Electoral College forces a candidate to campaign all around the country, rather than focusing on certain states to win. However, this point has already been refuted due to the large influence swing states have in an election. It is very common for candidates to constantly campaign in swing states while visiting safe states only once or twice. Lastly, those who argue to keep the Electoral College claim it acts as a mechanism to prevent power-hungry, popular, unfit candidates from gaining office.

For the Electoral College, multiple elections are held throughout the nation, forcing candidates to appeal to Americans from all over the country to win their electoral votes. Therefore, in theory, the winning candidate should have a majority of the people’s support as well as support in different regions of the country. According to Jonah Goldberg of Los Angeles Times, “very few advanced democracies—including none in Western Europe—elect national leaders without some mediating process designed to filter out demagogues or the unfit.” Essentially, Goldberg reasons that the Electoral College acts as an arbitrary mechanism needed to weed-out popular, unfit candidates.

Throughout the course of our country’s founding, many systems were implemented and removed depending on the needs of the people. Some of these systems simply have become outdated and unnecessary as society modernizes. The Electoral College has its benefits and faults. This unique system of electing a president not only has an interesting past, but also has forced many to consider whether this system still fits the 21st Century version of the United States.