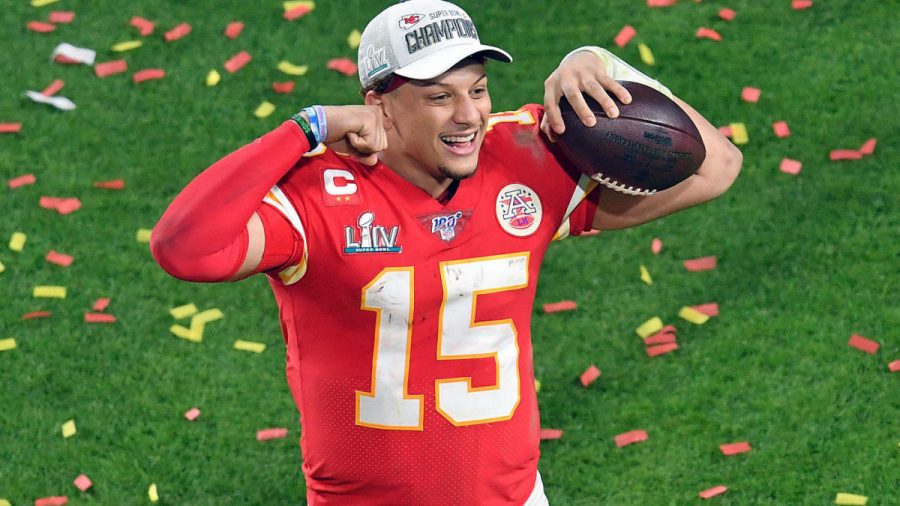 Mahomes celebrates the Chiefs’ victory in the Super Bowl (photo from CBS Sports).

On Sunday, February 2, the Kansas City Chiefs defeated the San Francisco 49ers 31-20 in Super Bowl LIV (54). The two teams had to battle their way through the AFC and NFC respectively to earn their spot in the Super Bowl. The Chiefs, led by quarterback Patrick Mahomes (the 2018 NFL MVP) and coach Andy Reid, who has been a head coach in the NFL for over 20 years, won the game with an epic fourth-quarter comeback. The 49ers coach, Kyle Shanahan, was only in his third year as a head coach and their quarterback, Jimmy Garoppolo, has up until now spent most of his six-year career on the bench. Ultimately, their lack of experience showed.

Despite the Super Bowl historically being one of the most-watched television events each year, not all BCA students watch the big game. Before the Super Bowl, only 59.4 perce

There are many reasons that BCA students did not watch the Super Bowl. The most common reason is a lack of interest in football, with 64.2 percent of students who did not plan on

watching the game giving this reason. Additionally, some students did not plan on watching the game because they are too busy, with 17 percent of students using this as their reason to not watch the Super Bowl. Despite its large viewership, the Super Bowl is not broadcast at a time that is accessible to everyone, particularly students.

The game has been broadcast Sunday evening in either February or January since its conception, but many students do not watch the game as it is on a school night, especially considering the game can go as late as midnight. “I could not watch the first half because I had too much work to do,” Junior Sajin Philip said. “But if we did not have school the next day, I would have definitely watched the whole game.”

Of the students watching the game, they were divided on who they wanted to win the Lombardi Trophy. While 25.4 percent of students were rooting for the Chiefs, only 21.5 percent were rooting

for the 49ers. The rest of the students, 53.1 percent, did not care about which team won. It is not surprising that BCA students have not rallied around either team, as neither the New York Jets nor the New York Giants, who both play here in New Jersey, were playing in the Super Bowl this year. However, not all BCA students are Jets or Giants fans. Junior Elliot Lee is from the Bay Area and before the game said “Go Niners!” He was heartbroken after the game.

e 16.1 percent were watching only for the half-time show, which was performed this year by Shakira and Jennifer Lopez this year. However, some students enjoy multiple aspects of the broadcast. One BCA student said, “I just enjoy watching [the Super Bowl] as a whole.”

Overall, many BCA students enjoyed the Super Bowl this year, albeit for varying reasons. Other students were busy doing other things or just not interested. Despite its timing on a school night, some students took advantage of the opportunity to spend time with friends from their respective towns. “The Super Bowl provided me and my old town friends a great time to get together and hang out,” Junior Parth Borker said. “It is something we don’t usually get the chance to do.”