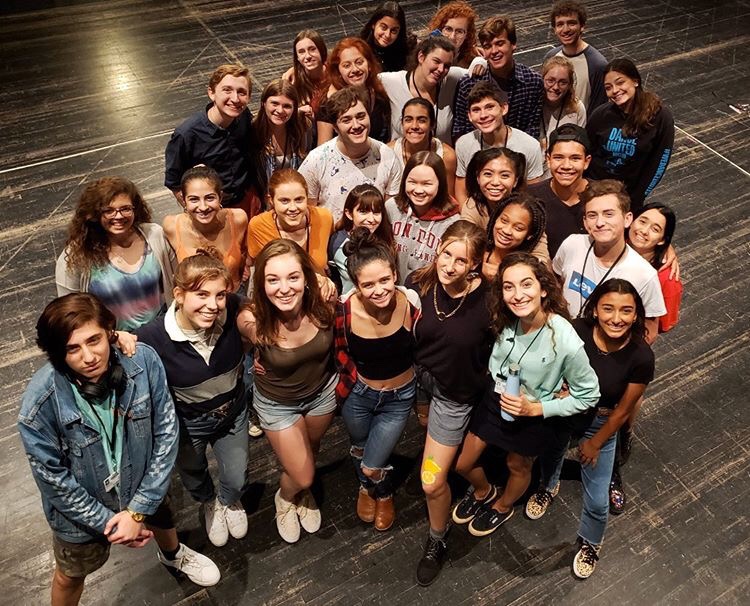 The cast of "The Secret in the Wings".

This week, BCA students will present their first production of the year, “The Secret in the Wings,” directed by Mr. Kaplan. The play, which will be performed at Bergen County Academies on Thursday November 14th through Saturday, November 16th, will give students in the cast a chance to showcase their talents in this out-of-the-box and imaginative theatrical performance.

With wit and humor, “The Secret in the Wings” by Mary Zimmerman explores the mystery behind lesser known fairy tales. A babysitter reads six very different fairy tales to a child, the characters become animated as she reads them.

When asked why he chose this particular play, Mr. Kaplan shared: “Mary Zimmerman, the playwright, wrote the very first play I directed at BCA called Metamorphoses… I was very excited to do it (‘The Secret in the Wings’) because it’s highly theatrical and has lots of parts for many students that are fun to dive into and explore.”

Along with two assistant directors and five stage managers, Mr. Kaplan cast twenty-four members from the auditions. Mr. Kaplan said the actors he cast made bold decisions during their auditions, which he believed would be beneficial to the different characters they would be portraying in the fairy tales. With so much going on in the play, from the storyline to the number of actors, crew members and the director, all would have to work together as a team to pull it off. Meeting and working on the show since the first day of school, the cast and crew have been rehearsing four to five days a week from elective hour until 6 PM. On weekends, they sometimes have had six-to-eight hour rehearsals.

Although the rehearsals require a lot of time and energy, the cast and crew have really enjoyed working on the play. Liz Farias, an AVPA/T senior playing the child read to, said, “I gravitated toward the abstract concepts within the script… The stories are so fun to tell, and each character is very peculiar… It’s some of the most fun I’ve had with a character… I like knowing what makes my character tick versus what she enjoys. I feel like we’re good friends at this point.”

On the topic of challenging parts in the play, Casey Beidel, an AVPA/T senior playing a misunderstood yet lively babysitter, said, “ [The most difficult part was] Finding the reality in it. The play is really warped and twisted so it’s hard to find the balance of absurdity and reality. ”

Liz pointed out, “My character is a young child for a lot of the time, she isn’t even real. None of the characters are supposed to feel real, so building those relationships within the fairytales is hard… I had to ask myself a lot of outside questions about my life and certain plot points. Finding the right age of my character also took me awhile.”

The actors also found the structure of the play itself challenging. Casey shared: “Navigating the transitions and messages behind each is really important to do, but hard to do because of the complicated nature of the play.”

Mr. Kaplan commented on the play’s complex nature. “There are six different stories that don’t connect beyond the framing device of the babysitter… The first story starts and just as it gets to its darkest moment, it flips to the second story which does the same thing… Then we see the ends of the fairy tales in reverse order — so it’s tricky to keep a throughline for the audience.”

Mr. Kaplan added that he hopes the audience will “be able to escape into the worlds we’re creating and recognize the power and importance of storytelling in our world.”

Thank you to Mr. Kaplan and the cast and stage crew members for working hard to bring what will certainly be an  amazing play to BCA! We hope students, faculty, and families will come out to see “The Secret in the Wings” production this Thursday through Saturday!