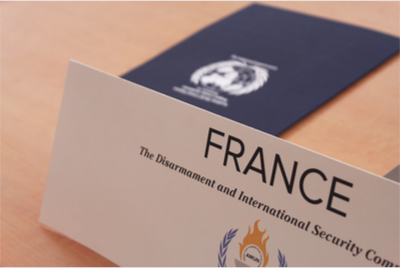 From February 1st to 2nd, over 500 students from a plethora of towns gathered in BCA’s auditorium for the opening ceremony of BCA’s 19th annual Academy Model United Nations conference. In anticipation of their first committee session, they shifted in their seats, cheering and applauding when prompted, but some, if not the majority, intent on making use of the possibilities laying in their committees and delegations.

For those who may not be so familiar with Model United Nations, MUN is a program in which students are assigned a country to represent in a particular organization or committee to debate current world issues. It essentially is what it sounds like: a “model” or mock gathering of UN members of different countries, all part of the same real-life committee, whether it be a larger body like the World Health Organization (WHO) or smaller one like the International Olympic Committee (IOC).

At BCA, organizers of AMUN were pleasantly surprised at the large turnout. Even though only BCA underclassmen participated as delegates, many of them won awards for their performance. Charge D’Affairs Grace Huang, a senior, addressed all the participants in BCA’s auditorium, stating, “…I have worked with your chairs, staff, secretariat since last June to organize this conference. What this means is that I have spent many nights imagining how my last conference would go and by all means you have all more than exceeded my expectations.” The crowd had applauded at that, as they watched their chairs on the stage. Upon the closing ceremony of the conference, she added, “I remain confident that you guys have set the bar for many AMUNs to come.”

And definitely, the bar for AMUN at BCA has been set high. With each year and the number of attendees growing, BCA is in store for what is hopefully another successful AMUN conference, equal to the efforts made by our very own MUN club’s Secretariat and teachers, Mr. Kramer and Ms. Buccino.

In addition to organizing its own AMUN conference annually, the MUN club is undertaking many more conferences. For one, plans for this year’s JAMUN conference are in the works– a conference here at BCA for middle schoolers, run by BCA underclassmen. The MUN club is also planning the next trips for the next school year (2018-19), as the last high school conference was WAMUNC (Washington Model UN). With trimester three in the beginning stages of its life, the Secretariat and club advisors still have lots to do to wrap up the year.

On that note, there’s a motion to adjourn. Hope to see you in committee!