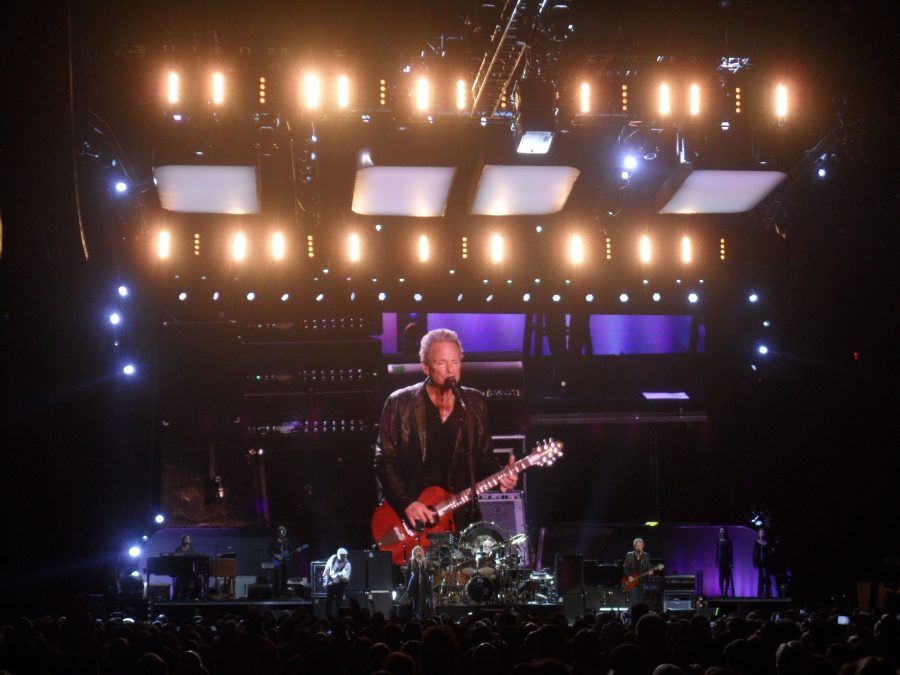 As the house lights dimmed and the shadowy figures of the band members emerged onstage, the crowd went wild. Then, as guitarist/singer Lindsey Buckingham slowly counted off “one, two, three, four,” the anticipation and excitement in the audience that had been building intensely exploded.

The energy ignited from the audience that occurred as Fleetwood Mac started off the night with “Second Hand News,” was incomparable. There was so much cheering and singing that in some parts of the song it was even difficult to hear the band over the PA.

The album in which that song appears, Rumours, was recently re-released, and as a result, a large portion of Fleetwood Mac’s set consisted of cuts from this record. In fact, 7 of the 11 songs on the album were performed that night, including the next two songs of the evening, “The Chain” and “Dreams.”

Before performing a powerful version of “Rhiannon,” the band played a new song titled “Sad Angel.” The song was catchy and sounded great- it captured the classic Fleetwood Mac sound, which showed that the band is still relevant while keeping true to its roots.

Halfway through the evening, there was an acoustic set featuring just Lindsey Buckingham and singer Stevie Nicks. Hearing Stevie’s pure voice with Lindsey’s acoustic guitar in “Landslide” was a surreal experience. She weaved the melody effortlessly and beautifully, and she captured the audience with her singing.

However, my favorite song of the evening was “Never Going Back Again.” The song was performed very emotionally, as Lindsey’s ethereal acoustic guitar echoed throughout the venue. Lindsey’s voice and dynamics further struck the hearts of the audience as he sang the touching lyrics so passionately. Whenever he sang, a hush fell over the dazed audience, and it was the quietest I have ever heard a crowd at a concert.

After the acoustic set, the rest of the band reemerged to close out the night with hit after hit. “Don’t Stop, “Gold Dust Woman,” and Stevie Nicks’ “Stand Back” all had the crowd singing along. “Silver Springs,” a b-side from the Rumours album, was also performed much to the audience’s approval.

Eventually, the show had to come to an end, and the closing number, “Say Goodbye” was a fitting as well as sentimental way to cap off this remarkable concert.

Stevie Nicks proved that age has not affected her stage performance, for her singing was spot-on and still powerful after all of these years. Lindsey Buckingham was in top form as well with his voice and guitar playing still sounding as great as ever. Bassist John McVie and drummer Mick Fleetwood also performed exceptionally well, keeping tight rhythms and grooves throughout the show.

The concert far exceeded my expectations, and I was left speechless for a few days after it. Even now, I still find it difficult to describe the show.

Go see Fleetwood Mac on this tour- I promise you will know what I mean.